Pathologies of the nails 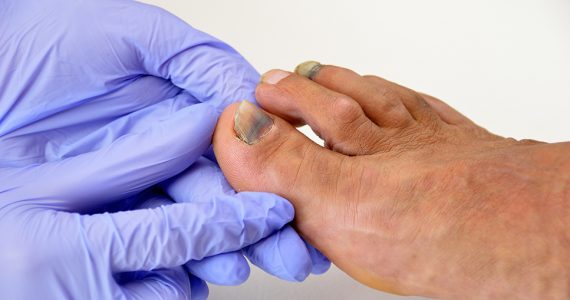 The most common pathologies affecting the nails are:

Anonychia is the absence of nails on the fingers or toes and can be either congenital (or more rarely linked to growth disorders) or acquired (as a result of psoriasis). This pathology may occur together with a variation in the natural colour of the nail (chromonychia). The cause of this alteration could be an intake of medications and/or the metabolism of toxic substances.

Following infection due to pathogenic agents (yeasts, moulds or dermatophytes) the nail tends to lose its colour either partially or totally, or it acquires grooves or white lines lengthwise from the base to the free edge.

In some cases, white spots on the nails are the result of air bubbles between the keratinocytes

Melanonychia is a dark pigmentation of the nail (brown or black) due to a build-up of melanin within the nail plate produced by a greater number of melanocytes than normal.
Causes of this pathology can be:

A condition in which the nail plate penetrates deep into the skin creating inflammation and pain.

This is an alteration in the nail structure in which the nail tends to break and/or split. Causes of this pathology can be:

This is a build-up of hyperkeratosis in the lateral fold of the nail most commonly affecting the big toe. It is usually caused by:

This appears as a thickening of the nail as it grows until it resembles a claw. In this condition it is difficult to cut the nail because of its thickness; it can come with age, but can also be due to sports traumas.

It is usually a precursor of nail psoriasis and usually appears as a detachment of the nail plate from the nail bed and a discolouration if a pathogenic agent is present; the lamellae can also lose their adherence and cause fractures.

Onycholysis can result from taking some medications or from repeated traumas (arising from sports or from footwear that is too tight).

The nail becomes fragile and presents striations and vertical cuts. Onychorrhexis is typical of elderly people.

This presents itself as a thickening, deformation and a greyish appearance of the nail plate due to the germinative hyperproliferation of the nail matrix. This condition can arise from:

Jadassohn Lewandowsky I Syndrome: A pathology of the ectoderm consisting of excessive thickening of the nails (from birth), blisters on the soles of the feet and palmoplantar hyperkeratosis. Because of a papillary atrophy, the tongue takes on a glazed appearance and verrucas and cysts can be seen on the epidermal layer.

This is an inflammation of the paronychium (the soft tissue surrounding the nail plate). It most frequently affects the index finger and the middle finger and appears as a swelling and reddening around the nail. To prevent it, gloves should be worn when carrying out activities that involve prolonged contact with water or substances (glucides) that encourage mycoses. It can be the precursor to an infection of Candida, Staphylococcus or Herpes Simplex.

This condition appears as a dulling of the nails (similar to the effect of an abrasion) and is associated with alopecia areata.

Caused by taking medications such as tetracycline or chloroquine.

Clubbed nails can be a sign of a problem in the respiratory system: lungs and bronchial tubes.

In general, this condition is caused by a Pseudomonas infection (small rod-shaped bacteria found in the soil and in water, it colonises the skin and airways of humans).

This condition affects the surface of the nail, it typically appears as yellow staining or a yellowish discolouration. Xantonychia is widespread among smokers, individuals suffering from psoriasis, those with an over active thyroid, those who use medications (tetracycline) and users of nail varnishes or solvents that are too aggressive.